This page contains my ideas on how to design and implement a framework for configuring (embedded) ethernet switch controllers from FreeBSD.

As of May 16th, this is only a slightly dated brain dump of various ideas and questions that I had during the past couple of months. I'm planning on updating this page shortly with information on the implementation that Adrian committed to -head.

In the meantime, please refer to my talk at BSDCan 2012 http://www.bsdcan.org/2012/schedule/events/330.en.html ; the video of the presentation should be posted to YouTube shortly.

The following questions likely should be answered:

This family of Atheros switches is used in a number of devices, including the TP-LINK TL-MR3420 and TL-MR3220 (built-in to the SoC).

VLAN configuration on this switch differs significantly from the RL836x family. Although it also has 16 VLAN table entries, the switch itself manages the table entries, so you can just say "add a VLAN for VID 27, and add ports 2 and 3 to it". On the Realtek switch, you have to do the management in the driver.

I've developed some code to control an RTL8366RB. The patch is at http://www.lassitu.de/freebsd/etherswitch-rtl8366rb.patch.

sys/dev/etherswitch/rtl8366rb.c implements the etherswitch interface and attaches the etherswitch driver as a child. It talks to the hardware by attaching to an I2C bus. On the TL-WR1043ND, this is provided via ar71xx_gpio<-gpiobus<-gpioiic<-iicbus.

The cdev allows a userland program to issue a number of ioctl to query and configure the switch. A forthcoming man page will explain the ioctls in detail.

One challenge in modeling the switch was to find a way to reuse the existing MII and PHY code (sys/dev/mii). The miibus code assumes that an Ethernet interface has a MAC interface that is connected to one or more PHYs through MII, and that these PHYs can be controlled via SMI (serial management interface) with MDC and MDIO. Since there is only a single MAC, only one of the PHYs can be active at any given time (all others must have the BMCR_ISO isolate and possibly BMCR_POFF set).

Register access over the software-implemented I2C bus is slow, accessing PHY registers even more so. In one iteration of the kernel driver, a callout ran every second to run the miitick and miipoll functions for each of the five PHYs. This took about 100 milliseconds per PHY per function, or about a second in total. Because the I2C access functions use DELAY(9), most of this time is wasted; essentially the machine becomes very unresponsive. I haven't found a way to deal with this, potentially the driver will simply ignore status changes on the PHYs.

In a typical Ethernet controller, there is one MAC, one MDIO master, and one or more PHYs (with MII slave and MDIO slave interfaces). The current miibus code (sys/dev/mii) relies on this model. The following diagram shows this typical setup. 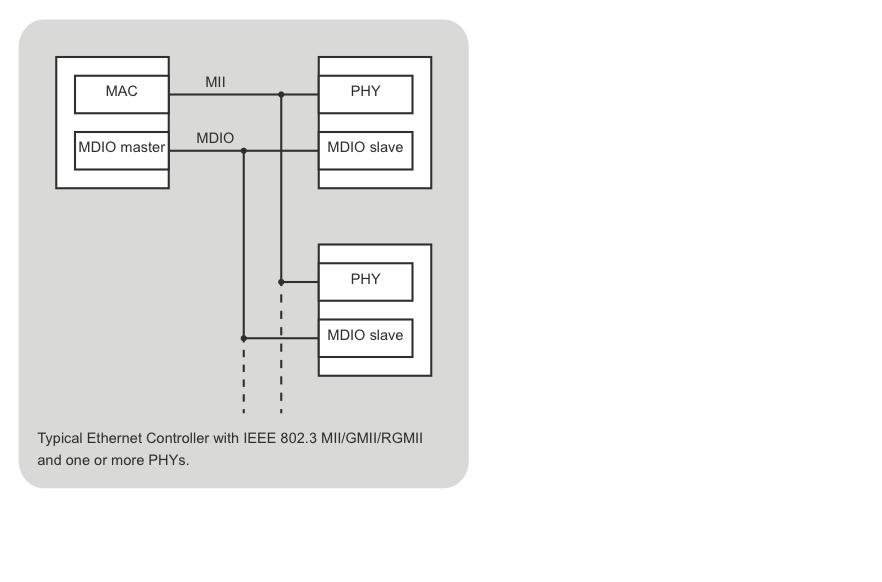 For embedded systems with an Ethernet switch, the picture becomes more complicated. The diagram shows a typical setup (for example, AR7241), where the two Ethernet interfaces are connected to the switch function, which in turn connects to PHYs. 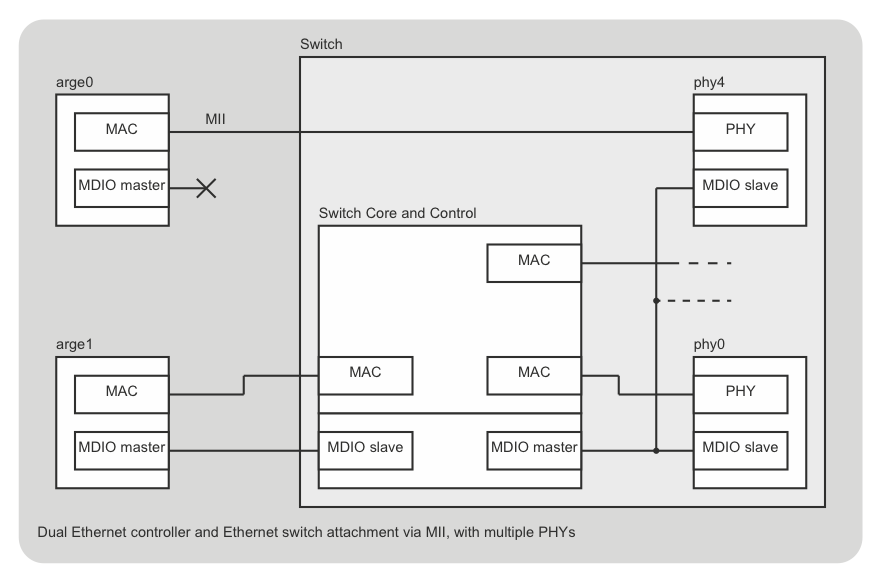 arge0 has it's MAC connected to PHY4; it's MDIO master is not connected.

The switch controller has an internal MDIO master, which is used to communicate with the PHYs. PHY0 to PHY3 are connected to their respective switch MAC via an MII each.

Since arge1 has a fixed connection to the switch core, a hard-coded (via hints) setup is sufficient. However, arge0 is connected to a PHY and needs to reconfigure it's MAC according to the PHY4 settings. To communicate, the arge0 driver needs to talk to the switch to read and write the PHY registers.

With the current miibus code, this poses a number of challenges: