FreeBSD/arm64 is the FreeBSD port to the 64-bit ARM architecture, also known as AArch64 or ARMv8. All supported FreeBSD releases include out-of-the-box support for ARMv8, and over 20,000 packages are available in the 3rd party software collection. Cavium's ThunderX is the initial reference platform for the FreeBSD/arm64 port.

FreeBSD Release Engineering builds specific images for arm64 including Pine64 and RPi3 & 4. The Cavium Thunder and SoftIron Overdrive series are supported via the normal build chain. Images for certain othr boards can be built by crochet.

The build sequence for the kernel is a fairly standard one:

This results in an image called 'kernel' created in:

** See the 'Source' section above for the svn-checkout-path.

The ARMv8 Foundation Model is available from ARM. You must read and accept a click-through license to obtain it. The Foundation model may be run in a Linux virtual machine, or by using the experimental 64-bit Linux emulation support.

AndrewTurner has a GitHub repo set up to help run on the Foundation Model.

QEMU now has aarch64 system mode emulation support. It is available by installing the qemu-devel package or emulators/qemu-devel port.

The Release Engineers build periodic snapshots, including for arm64 on QEMU. Instructions on where to find these are sent to the snapshots mailing list.

See arm64/QEMU for further details on booting FreeBSD/arm64 in QEMU, including links to AArch64 EFI firmware files that are not included with the QEMU port.

The http://macchiatobin.net/MACCHIATObin series of boards is supported.

As noted by Greg at unrelenting.technology:

This section has moved to arm/RockChip

This section has moved to arm/Raspberry Pi

Cavium's ThunderX is the initial reference target platform for FreeBSD/arm64.

FreeBSD is available on the 2 socket, 96 core Type 2A ThunderX systems at Packet.net.

Demo of SMP kernel on ThunderX

Although the HoneyComb from SolidRun is available as a single board, it is more targeted at the workstation market.

These servers are based on the Ampere eMAG chipset. There is ongoing active work to support them. A number of FreeBSD developers have these systems, and they are well supported from 13.0-RELEASE onwards.

The FreeBSD 12.0R GENERIC (and later) memstick installation images work on the SoftIron Overdrive 1000 but requires opensolaris_load="YES" to be set in /boot/loader.conf. This can be performed at the end of installation or on first boot by typing ESC during the (likely garbled) "Beastie" boot screen, and typing:

Once booted, add "opensolaris_load="YES" to /boot/loader.conf with the editor of your choice.

The power button is the vertical chrome rectangle on the front.

Be cautious not to frequently cut power to the OD1K as it may corrupt the firmware.

FreeBSD mostly works, other than the internal dual 10G networking, however support for this is being worked on. In the interim PCIe NICs work. 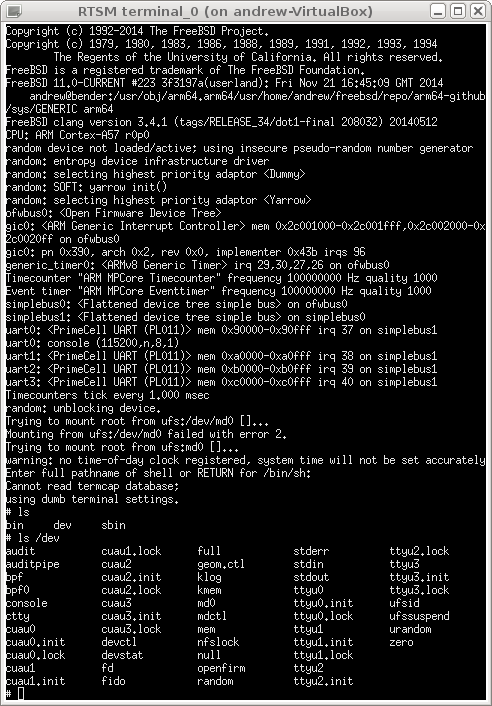