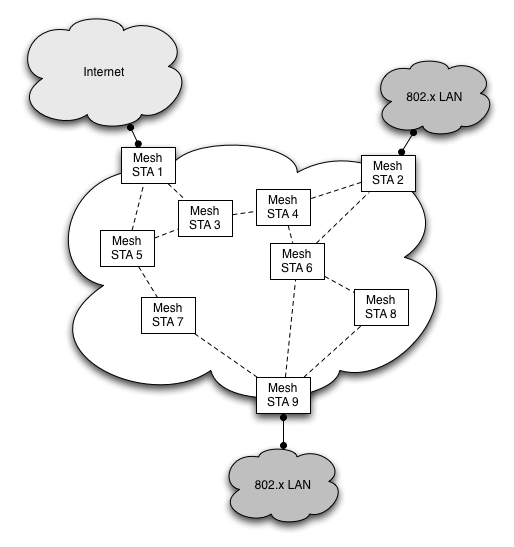 A wireless mesh network, sometimes called WMN, is a typical wireless network but using a mesh topology instead. These networks are often seen as special ad-hoc networks since there's no central node that will break connectivity (in contrast with common wireless networks that you have at home/office, where there's a central Access Point). 802.11s is an amendment to the 802.11-2007 wireless standard that describes how a mesh network should operate on top of the existing 802.11 MAC. If you want to know more, check the resources section. You may already know about the Wireless Distribution System, WDS for short, and if you do, just think of 802.11s as the standard that will expand and unite WDS. Note that 802.11s is much more complex than WDS (for example, 802.11s includes a routing protocol, an airtime link metric protocol and a congestion control signaling protocol, just to name a few).

This project aims to implement the upcoming 802.11s wireless mesh standard (not yet ratified) on the FreeBSD operating system (of course

Development is occurring at the FreeBSD HEAD branch and an experimental support is present on FreeBSD 8.0.

This work was sponsored by The FreeBSD Foundation.

Given that the Linux 802.11s implementation (in wireless-testing) was based on an early draft, we can't talk with Linux mesh nodes.

How to setup a mesh network

On every mesh node, type:

The first line is your own interface and you can ignore it. STATE is the most important column. In order for a mesh station be reachable, it must establish a peering instance with another mesh station, so if STATE shows anything else but ESTAB, peering hasn't occurred or it was not successful. Don't worry about the tx rate for now. 6M is the rate for management packets and that's basically what we have exchanged for now. When you start sending packets, the rate will change.

After trying to exchange packets with neighbors and non-neighbors the routing table will get filled. In this example, I'm using a star network topology, all packets go through a central node. ifconfig wlan0 list mesh will show the routing table:

Note a meshid must be specified and the channel must be fixed; eventually you'll be able to scan for mesh networks and join using a wildcard meshid. Also, understand a meshid is different from the SSID you may be familiar with. In a mesh network beacon frames will always have an empty SSID string.

If you have 3 or more systems and would like to try playing with a different mesh topology, you can use ifconfig MAC ACL commands to do it. This requires that each system be configured to include device wlan_acl in the kernel configuration (or the module loaded with kldload). For example, imagine you have three mesh points (mesh nodes) MESH1, MESH2 and MESH3 and you want to create the following network topology:

And on MESH2 you type:

Notice the mac:allow command. This means that you only allow some nodes to peer.

Check tools/tools/net80211/scripts/mesh for example scripts that can help you setup different topologies.

Bridging mesh with wired or wireless

There's experimental support for bridging a mesh interface to another interface, either wired or wireless. The bridge(4) man page has several examples on how to setup bridging.

The current status and further work are in the process of being identified. Some initial testing steps and things to look at, noted by AdrianChadd... this list will grow: